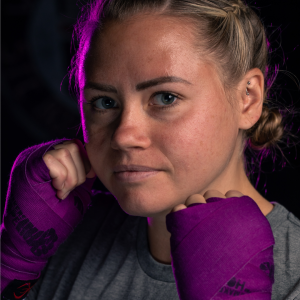 Belles of the Brawl IX
Boston 2022

Everyone knows someone who has been impacted by cancer and I am fighting so that one day, no one has that in common. At 29, my beautiful friend, Colleen was diagnosed with breast cancer after her honeymoon. Her life was consumed by chemotherapy and radiation appointments, lumpectomies turned to double mastectomies, and to make sure her estrogen feeding cancer hopefully never returns, an oophorectomy. Then comes the reconstruction surgeries, growing back her long hair, night sweats, battle scars, and learning to live a new normal with regular checks to make sure she stays cancer free.

Colleen is a true fighter, because she never let put her hands down, got right back up after every hit and continued until the last round of her fight. It's with this same resilience and determination that I'll carry with me as I train. And while I fight with strength to celebrate her victory, I am also fighting for those who were not as fortunate in their battles. Dan Stearns, JB Griffin, and Debbie Knight, you fought hard and we are always in your corner, this one's for you.