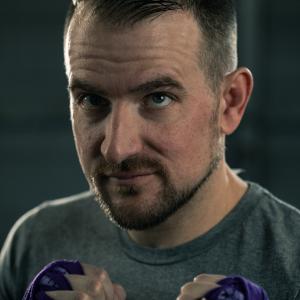 I’ve read a lot of Haymaker’s stories on my quest to fight at this event. I’ll say one thing before I start: The main reason I’ve chosen to participate is because my story isn’t special. It’s painful for me to talk about and unique to my experience, but I know many of you out there deal with the same pain and loss.

There are a lot of people I could say I’m fighting for: My grandparents. A childhood friend who passed away way too young in my college years. The many survivors I know, who lived through it and can tell their story. Or, even my own very minor scare.

But, at the core, that isn’t why I’m fighting. I signed up for Haymakers the same week my friend passed away, after a long, long fight with glioblastoma. It’s an aggressive brain cancer with little survivability… The median time of survival is 15-16 months with treatment, and he fought it for 8 years.

I met him first at the University of Virginia, when we lived in the same freshman dorm. He was on a different floor, but the Golden Eye tournaments in my hall were pretty well-known in the building, so when I met him again years later, there was definitely some mutual recognition... I don’t dye my hair blue anymore, but it’s at least noticeable in central Virginia. Our college paths diverged beyond the first year, but we encountered each other years later in Medfield where we live. We both have kids the same age. My youngest daughter was in pre-school with his youngest, and they became fast friends. When he and I did some forensics on our lives and realized our connections, we talked about a shared love of Virginia sports, craft beer, and fine bourbon.

Over time, we would realize both our fathers had passed away, and we struggled with the loss of that. And, when his cancer re-emerged, our friendship grew closer because I really wanted to help this person who’s life so similarly mirrored my own. I wanted him to win, to beat it. If there was any justice in this world, this kind, compassionate, intelligent father of two would kick this, even if the prognosis was still dire.

It got harder for him, but he was always positive. He lost some of his motor control. He lost some of his vision. He dealt with the rollercoaster of medication side effects. He had to stop working. Still, though, I’d stop by and take him out for breakfast, and it was always “Well, I spoke to my occupational therapist, and they think with enough effort, it’ll be a lot better. I just need to keep up with the exercises.”

And, then, one day it wasn’t fine or improving.

The main memory I have was talking with him in his kitchen because the next day, he was planning on telling his kids he was probably going to die. Being the father of two daughters the same age, I just couldn’t cope with it internally. How do you tell your kids you’re dying? How do you sit down and tell them that one day soon, their father isn’t going to be around? How do you even start explaining it to someone you love?

I went home that night and cried for a while, because I didn’t know what else to do. I visited him more as the decline went on, and eventually last saw him a few days before he passed. I told him we’d make sure his family was fine, and that I’d miss him. And that at least we got to see Virginia go from an embarrassment to national champions in true Wahoo fashion.

But, this fight is actually more about me, and what I need. After he died, I felt helpless. I felt lost. I felt totally and utterly powerless. I didn’t understand why he was afflicted with this horrible cancer, and I could keep living. I didn’t think I could fight as long or as hard as he could, and maintain that same positivity. So, I need to use my time and my energy and my strength to make a difference here...Because I’m still here, when others are not. If he can fight cancer for 8 years, I can train for 4 months and take a few punches to the face if it will help raise money.

I'll be trying to raise money for the American Brain Tumor Association which funds education, research and support to those with brain tumors, and Family Reach, an organization dedicated to eradicating the financial barriers that accompany a cancer diagnosis.