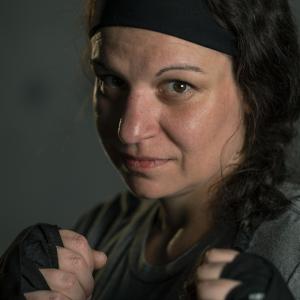 I'll take as many punches as it takes to help knock this disease out.

Yesterday I received a call, another person taken too soon... their battle with cancer lost.

I was five when I learned that cancer could take people who you love away.

I remember the day my father sat me down and explained that my Grandmother had passed away... that she was "gone". I asked him if he was sure? "Did they check under her bed, and in the closets? Maybe she was hiding?" I'm sure the questions drove him crazy. That was when I learned that your body didn't actually go to Heaven... also the day I understood souls.

32 years later and I watched my Mom and my Aunt skip right over a picture of me wearing one of my grandmother's wigs, after all of this time that picture and the memory of the loss, still brings tears to their eyes. In 1983 I was naive to what the adults had gone through; protected by the innocence of a child.

Now... 2019...the list of people I know who have battled with this terrible disease seems endless. Some battles have been won, others were not so lucky.  I do know, watching someone take their last breaths after fighting so hard, is one of the most difficult things I have experienced.

I am honored to be participating in this year's Haymakers For Hope event. In my opinion, getting punched in the face is absolutely taking the easy route, compared to fights I have witnessed.

So Belles of the Brawl VII it is.... I have never boxed in my life, I do NOT like hitting people and I didn't have a clue what a "Southpaw" was a few months ago. I don't really love working out, I have run 8 marathons, so that is something I guess... However, I have been assured that being punched in the face for 6 minutes is very different. I guess I will find out in October!

The courageous fights I have witnessed against cancer, whether they were won or lost... the unknown people deal with, the families involved, the treatments, the financial and emotional toll it takes, the side effects, the hope...  These people have helped show me the strength people are capable of... I am truly grateful.

I choose to fight, because I can... I choose to fight, in hopes that fewer people will ever NEED to fight. The people who will need to fight, that their battles become easier, that diagnosis and treatments continue to get better with medical research. With the ultimate goal...The need for any battles comes to an end, that cancer is truly "knocked out".