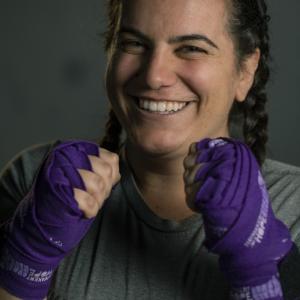 I should start off this introduction by telling you about who I am doing this for. It’s not hard to find someone close to you who suffers from this terrible disease, but for me, one person in particular has embodies what it means to fight with everything you’ve got: my favorite auntie Gail.

My auntie Gail is the most unassuming woman you have ever met. You wouldn’t look at her and say “oh yes, she’s been battling stage four breast cancer for decades.” She has beautiful skin, lovely silvery hair, and smiles constantly. Lovely is the only way to describe her demeanor. Gail and I have always been close and got even closer when she lived with me for about 7 months a few years ago. She told me as she adored her son (who makes her so proud as an orthopedic surgeon) she had always wanted a daughter. She taught me how to sew and helped me make my first dog Halloween costumes (they were Pokémon, the costumes are awesome). We would sit around binging on popcorn with silly mud masks on our face as we discussed everything from politics to skincare, and still you would never have known she was sick.

But her struggle has been very prolonged and profoundly difficult. Of course she had a mastectomy, went through every treatment multiple times as her cancer kept returning, and is part of many studies and trials to help not just herself, but other people affected by this disease. Over the years her cancer metastasized spreading across her body including into her lungs and spine. She has a permanent pain pump installed in her torso to ease her chronic pain. She attends counseling and is part of support group for other survivors like herself.

It is kind of incredible how one moment can change your life. Just a few weeks before the Belles signups, Gail was diagnosed with a second type of breast cancer and had to seek emergency treatment. Her biggest concern that she voiced while she was getting treatment? Not if the treatment was working, but how in the world she would be able to finish my three year old nephew’s “ring bearer” suit for my brother’s wedding. My aunt Gail won’t get better, but she doesn’t let that stop her. She has outlived EVERY predicted lifespan that any doctor has given her. I think it is because she maintains her belief that even with her diagnosis, she deserves a good life and so she never stops fighting.

I’ve decided to throw my hat into the ring for Belles for Gail, and all the people in my life who continue to fight in a much more important round.