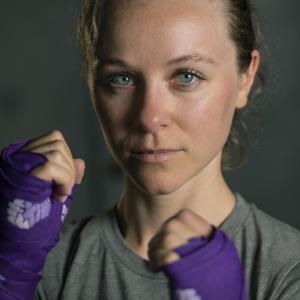 Life will test you, but remember this: when you walk up a mountain, your legs get stronger.

I fight for my mother-in-law, Josie, one of the strongest women I have ever had the honor to know and love. She was beautiful, sassy, and strong – a true force to be reckoned with. I looked up to her in so many ways. She could not wait to finally become a Nana. I was 7 months pregnant last March when she had her first seizure. What started out as a minor scare, quickly became our worst nightmare. We learned that she had a terminal brain tumor, completely unrelated to the two previous battles with cancer that she had fought and won years ago. The same week that I was in the hospital giving birth to her first grandchild, she was undergoing her first radiation treatment. My husband, Greg, was splitting his time between MGH with me, and Dana Farber with his mother. For months after our daughter was born, Greg spent sleepless nights with a crying newborn and weary mornings in a wheelchair van, taking his mother to 10 hour long appointment filled days for treatment. That is love. That is stress. That is happiness, and that is sadness. There were days that I would look at my husband unable to tell if his face was full of joy or horror. Emotions were no longer what we were used to. His mother was dying, and his daughter had just started living. We lost Josie to her valiantly fought battle with brain cancer this past October when our baby was just 5 months old. One year later, this coming October, I will step into the ring in celebration of all those who have won their fights against cancer, in honor of all those who we’ve lost, and in loving memory of our dear Josie.

100% of donations made will go to Dana Farber Cancer Institute.